Japan Probe definitely has a conservative bent, and it’s readers (if the comments are anything to go by) are generally even more conservative.  But in a post of election commercials (actually party commercials because it would be illegal for them to tell you to vote for them or anything) Japan Probe put up two from the Japan Communist Party but only one each from the other parties featured.  The author didn’t even criticize the JCP.

So, a few days ago, I thought I’d do a little experiment and post the JCP’s recent slogan, featured at the end of each of their commercials, as a comment.  Have a look at the results: 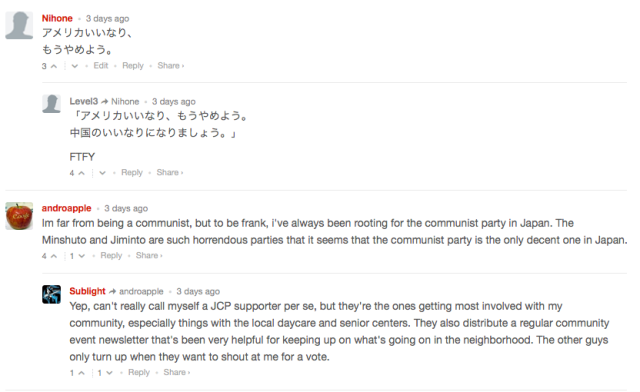 How about that, it became the top comment!  A commenter’s sarcastic reply received more up votes, but still not a single person capable of reading simple Japanese voted it down.  Also, unrelated to me, two other people posted positive comments about the JCP.  Overall they garnered five up votes and only two down (probably from the same, non-Japanese reading person).  Rather interesting.  Even though the readership of Japan Probe is so conservative that both of those positive commenters felt the need to make it clear they were not red communists, there’s at least a measurable amount of love for the JCP among them.

Incidentally, the slogan I posted translates to something like “Let’s stop doing whatever America says already.” or “Let’s finally stop living under America’s thumb.”

This entry was posted in Internet commentary. Bookmark the permalink.