I’m taking a look at a Japan Guide post that is not the original post for a change: 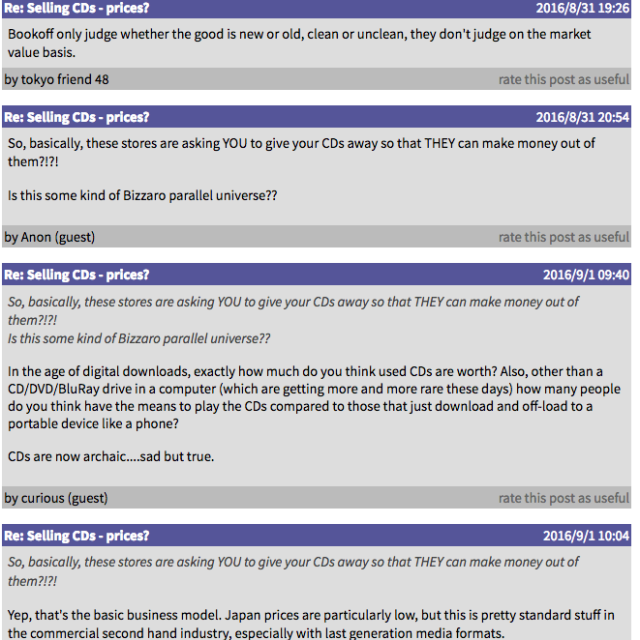 “So, basically, these stores are asking YOU to give your CDs away so that THEY can make money out of them?!?!  Is this some kind of Bizzaro parallel universe??”

To answer the second question first:  yes, it is.  Seriously Japan is as different as you can get from the West while still maintaining developed “first-world” institutions. 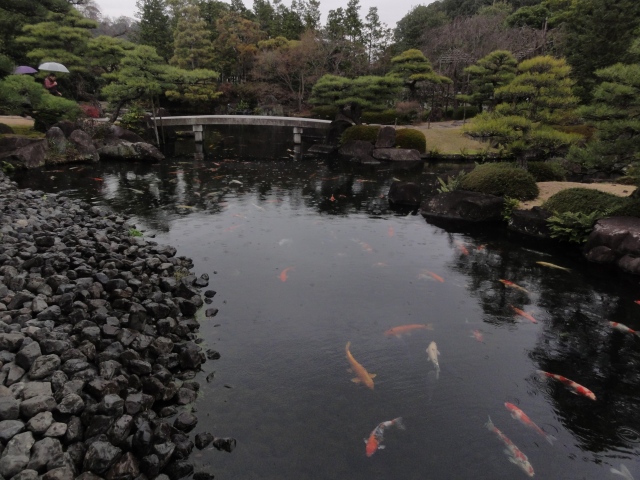 But on to the point about how in Japan you generally don’t get very much when selling your used goods to used goods shops.  I find that generally places only want to give you about ten percent of what they intend to sell it in the shop for.  Which does seem a bit unfair.  But there are a few things to consider:

1. Many  of these places advertise that they will buy anything.  No matter what you bring them, they’ll at least toss you a ten yen coin for your trouble, even if it is pretty unlikely that they will ever find a buyer.

2. They handle everything for you.  You just bring in a big box of all your crap and then go wander around the shop.  They’ll give you a number that they will call when they’ve finished evaluating your load and you just sign and take the money.  It’s hassle free on your end.

3. You don’t have a shop to sell the stuff yourself.  These days, of course, you can sell your things online yourself, but if you’ve any experience with that (as I do) you’ll know just how much work it is.  If you have things you know are very valuable, I might recommend it if they don’t offer you a good price at the shop.  But it would really have to be worth a good bit of money in order to justify the hours of work you’re going to have to put into listing, dealing with bidder/buyer questions,  shipping, getting bitched at by people who think you’ve overcharged them on shipping, and then having to refund people who decided they changed their mind about the whole thing.  It is a huge hassle and pain and not at all a fun experience.

4. In Japan, often the shops are doing you a favor by giving you any money at all.  That is, even if you want to take the stuff out to the curb instead, you can’t just take the stuff out to the curb in this country.  I live in a city with relatively few rules about recycling, but even for me if I wanted to throw a bunch of old CDs away I would have to sit down and separate out the discs (burnable trash), from the cases (plastic recycling), from the inserts (paper recycling).  So getting no money and throwing them away actually means more work for you then taking them to a shop and getting a small amount of money.

5. And, of course, it is nice to give your old things the chance to keep being used even if it means no significant monetary gain for yourself.

This entry was posted in Culture, Internet commentary. Bookmark the permalink.